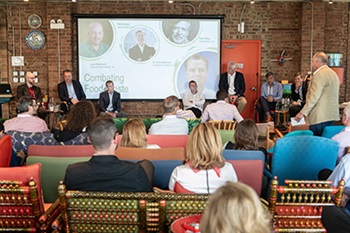 Most of us can relate to the fate of a container of strawberries, which were planted, grown, harvested, processed, packaged, transported and merchandised with care and bought by a consumer with the best intentions, only to turn moldy in a home refrigerator and end up tossed in the trash.

The strawberry – featured in a video produced by the World Wildlife Fund (WWF) and shown at a panel discussion on Combating Food Waste during the recent FreshForward event in Chicago – doesn’t stand alone. According to panelist Dr. Frank Mitloehner, professor and air quality extension specialist in the Department of Animal Science at the University of California, Davis, 40 percent of all food grown in the U.S. is estimated to be wasted, a figure that holds true internationally and in developing countries, where food often is left on the field or other places before it even gets to market.

With food waste comes financial waste. Even if dumping extra product is cheaper in the short run, it is a big issue in the long run that leads to a host of losses in the food chain.

Food waste impacts the world on another level. Panelist Pete Pearson, director of food waste for the World Wildlife Fund, estimated that up to 70 percent of biodiversity loss is attributable to food production. Habitat loss is another fallout of practices that lead to food waste.

The FreshForward panel's other experts, Mack Tilling, president of Relish Works Inc., and Jason Wadsworth, manager of sustainability for Wegmans Food Markets, Inc., also suggested ways that food waste can be reduced, particularly at a time of increased awareness of the problem among consumers, food producers and purveyors alike.

One way to reduce food waste in restaurants, institutional settings and in consumers’ homes is to cut portion sizes.

Consumers are often confused by “sell by” and “consume by” verbiage, something that can be amended with clearer package information. “We need to think about proper labeling,” said Mitloehner. To that end, grocery manufactures and retailers have joined together to streamline and standardize the wording accompanying the date labels on packages to offer shoppers greater clarity regarding the quality and safety of products. Learn more about the Product Code Date Labeling effort.

Other innovations may help in this challenge: Tilling, for example, says that he’s learned about testing of thin litmus-like test strips that gauge product decay. “You can build that into packaging. It could be a game changer, but it is probably still a few years away.”

Tilling reports that more stores are investing in sophisticated inventory systems, while suppliers like Relish Works are investing in technologies such as blockchain. “We think of it as a biography of a food product,” he explained.

“We want to make food loss taboo,” said Pearson of the WWF’s effort to educate consumers about food waste and how to prevent it. In addition to consumers, he recommends sharing information about shrink and loss within the industry as a pre-competitive way to better measure and prevent waste.

Food donation as a way to reduce food loss ensures so that food doesn’t end up in landfills and waste the energy and time put into its production. Pearson estimates that about 90 percent of food waste now goes into a hole in the ground, which in turn increases methane emissions, also impacting the environment; that percentage can be reduced with better food sharing and donations of edible excess food.

Retailers have a lot of roles to play in combating food waste. At Wegmans, Wadsworth says that the company donates or recycles food waste, so that 40 percent of food is taken out of the waste stream. Supermarkets can work with local growers to use excess food in animal food or compost. To ensure success with zero waste initiatives, Wadsworth noted that Wegmans regularly conducts waste audits at its store. “At the end of the day, it’s about structural change and people,” he remarked.

In my opinion this conversation was the most robust at the event with some real opportunities for solutions discussed. As Wadsworth pointed out, we not only need to understand how to prevent food waste, but we need to have clear plans on how to handle food waste once we have it. Working on both sides of the equation is necessary.