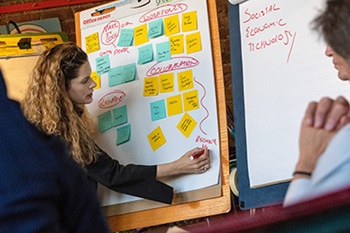 There are a lot of reasons to pay attention to food production trends. Billions of reasons, actually.

“When I was a boy, the world population was three billion. Now, we are at seven billion. Throughout our lifetime, human population on the planet will have tripled,” said Dr. Frank Mitloehner, professor and air quality extension specialist in the Department of Animal Science at the University of California, Davis, in a panel discussion on Global Food Production at FMI’s recent FreshForward event in Chicago. While the human population surges, there is not an accompanying expansion in land, water and fertilizer, Mitloehner added.

In this unbalanced supply-and-demand equation, Mitloehner and his fellow panelists, Sebastian Langbehn, head of global vegetable seeds for Bayer; Jim Lemke, president of Robinson Fresh; and Chuck Gitkin, chief marketing officer for Cargill Protein Group, shared their respective insights on food production trends that food marketers and retailers should heed to meet their consumers’ demands and play their role in the worldwide food chain.

More than ever, food producers and retailers have to overcome various (and often stubborn) myths and build trust among their customers. According to Mitloehner, the U.S. has the lowest environmental footprint in the world for livestock, with nine million dairy cows today versus 25 million in 1950 that produce 60 times more milk; the trends are similar for beef and pork production. Also contrary to many beliefs, the entire agriculture segment comprises nine percent of greenhouse gas emissions here, behind power and transportation.

Gitkin reports that as a company involved with almost every aspect of food production, Cargill regularly contends with consumer misperceptions that global food producers, “aren’t on the side of good,” and that food companies are last on the list of those whom consumers trust for food. “We are not trusted, and we need to change that dynamic. We are not the bad guys – in fact, we are the good guys,” he declared, adding that Cargill and other food producers are using technology to enhance production innovation, automation, efficiency, and consumer interactions.

Just as technology is an important driver of consumer expectations and behaviors, it’s also a powerful tool for food producers. Gitkin cited the fact that Cargill will ship five million turkeys this Thanksgiving that are fully traceable back to the family farm. At Robinson, Lemke reported that the company is increasingly marrying its logistical expertise and produce expertise to fulfill the needs of the supply chain. Langbehn, meantime, highlighted the importance of utilizing innovation and technology to feed the world's population, citing the example of China, which has an infrastructure that includes seed building in the eastern corridor and urban and vertical gardens that allow the nation to consume 53 percent of the world’s produce. China also uses tools like blockchain to enhance trust in food safety.

From tariffs to regional conflicts to food safety standards, the ever-changing geopolitical scene affects global food production. “It’s really crucial for our business to understand new trade laws. If you don’t have a good customs area in your organization, then get someone who does to help you facilitate goods on a consistent basis,” Lemke suggested.

After breakout sessions, the group agreed that understanding global food production is necessary. There are many scientific advances that are underway to allow our planet to grow and raise food to meet the demand, but only if we focus on the mission and agree on the strategies. We need to educate our customers more on how food is grown and raised, which will allow the consumer to embrace technological advances.