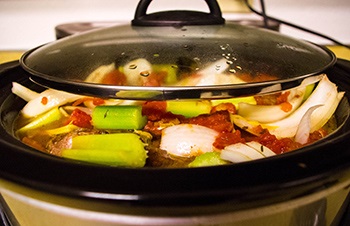 Together, meal kits and multicookers could provide food retailers with their next great sales growth.

While meal kit online sales continue to grow, some e-commerce providers have begun to struggle a bit and it’s becoming clear that the traditional brick-and-mortar store may be one of the best places for consumers to purchase them.

According to market research firm NPD Group, in the 12 months before the December 2017 holiday season, U.S. shoppers spent nearly $380 million on multicookers. That is up from just over $100 million two years earlier. The U.S. sales of multicookers has more than doubled in 2017 to nearly $400 million.

The best known multicooker is the Instant Pot, made by the privately held Double Insight, which doesn’t release sales figures. However, Double Insight’s Facebook page has 1.3 million followers and in 2017 Instant Pot was the most-gifted item on Amazon’s wedding registry. See more sales details here.

Meanwhile, a handy meal-kit guide and research prepared by Nielsen indicates spending on meal kits is growing three times faster than all the other channel options available to consumers - groceries, restaurants and convenience stores, among them.

Industry leaders Blue Apron and HelloFresh generated $1.5 million in online sales in 2017, up from $1.1 billion the year before. But, as the consumer appeal for meal kits ramps up, the e-commerce companies that sell them are running into logistical challenges that can cut deeply into revenue and profit, challenges that brick-and-mortar stores may be able to manage more effectively.

Food retailers who have already seen the potential include Kroger, which in May paid $200 million (along with potentially $500 million in incentives) for Home Chef. By then, Albertson’s had acquired Plated and Blue Apron had started selling meal kits in Costco stores. Ahold-Delhaize has also recently partnered with HelloFresh to offer in-store meal kits.

There are at least three reasons why brick-and-mortar stores could successfully compete with online meal kit companies.

Nielsen’s research found that 26 percent of meal kit buyers identify themselves as “gourmet cooks,” compared to only 16 percent of all U.S. consumers.

As FMI promotes the value of home cooked meals and preps for National Family Meals Month™ in September, what do you think a happy marriage between the meal kit and the multicooker could do for food retail?