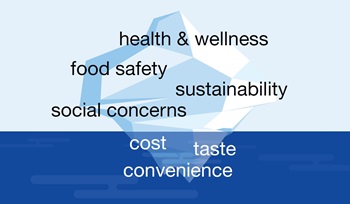 There is no doubt that there is a primal shift within the food industry with consumer reality that is changing the way we do business and revising industry leadership needs.

You’re familiar with the saying, “that’s just the tip of the iceberg,” which is metaphoric shorthand for a HUGE problem with only one small aspect being seen clearly. That metaphor is based on the fact that only 10 percent of an iceberg is visible and its more dangerous heft lies lurking, hidden beneath the ocean waves. But there’s another iceberg phenomenon I want to use metaphorically—the amazing occurrence when an iceberg tips or sometimes completely flips over in the water. This awe-inspiring event happens when, due to melting or splintering, the iceberg’s equilibrium shifts, moving its center of gravity to the point that these massive blocks of ice do an aquatic somersault and flip over. It’s an amazing sight, and just as astounding, scientists have determined that the energy released in an iceberg flip is equivalent to that of an atomic bomb being detonated. This reorientation of what was up is now down, and what was submerged is now visible is an enormously powerful occurrence.

Consumer concerns and opinions have always been a huge part of the food retail experience, but I contend that much of the shopper’s power has been like the iceberg – with only 10 percent seen and the larger portion submerged and out of sight. The advent of the technology-driven information age, with its mass communication capabilities and capacity to access and share information, knowledge and insight, has produced the conditions necessary for the equilibrium of the consumer iceberg to shift, resulting in a dramatic flip and exposing its true magnitude and power.

For over forty years, FMI has been tracking consumer trends. In those early decades, U.S. Grocery Shopper Trends data made it relatively easy to calculate what was going on in the shopper’s head as she shopped—and at this point it was prominently a she. Back then, the grocery shopper’s value equation had three clear factors: cost, taste and convenience. The equation looked something like this:

Other factors may have been there for some, but for the most part these were the only visible ones. Then we started seeing other considerations creep in. Issues like environmental considerations grew. At the turn of the new millennium, we noticed questions regarding health and wellness being asked more frequently and with more intensity regarding food purchases. Food safety concerns began to be expressed, and then some shoppers began asking not only how much does this bacon cost, but how was the pig treated during its lifetime? And how well was the orange-picker paid? And the factor list expanded and expanded until today the value equation looks something like this:

Truthfully, most retailers remained product-focused and continued acting as if the traditional three-factor equation was still the only one operative since those factors remained viable. But then about four years ago, FMI was joined by the Grocery Manufacturers Association in asking Deloitte to undertake some research that discovered the equilibrium had sufficiently shifted that the iceberg had actually flipped. Now don’t misunderstand me—cost, taste and convenience remain VERY important factors in the shopping equation, but today they’re table-stakes, flipped to the bottom, beneath the surface as expected underwater attributes floating beneath a host of other factors. And other factors are now much more visible and putting pressures on the traditional three. Our research showed that over half of all shoppers had at least one, and in most cases, multiple of these evolving value drivers, concerns like health and wellness, food safety, social concerns, and experience in their shopping equation.

The collateral effect of the consumer iceberg flip is creating waves of change in how food is produced, packaged, transported, and marketed. This flip requires a new style of leadership, one grounded in customer service and consumer knowledge and with sufficient capacity to move quickly and decisively. The new food retail leadership must be swift to perceive and quick to act on the new consumer insights being exposed by the turning iceberg. To stay on top of the iceberg, leadership must be able to quickly move as the iceberg is turning - because we all know it will tip, shift and roll again.

So, in my view, this is the challenge for the future retail leader:

Food retailers are called to the task of harnessing the power of the tipped iceberg and connecting empowered consumers with empowering food. Do this and not only will you feed families, but you’ll also enrich lives – one neighborhood at a time.