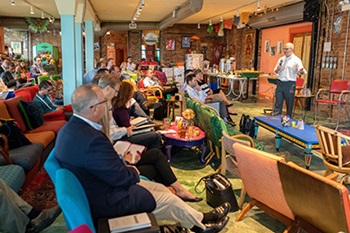 The venue for the recent FreshForward event in Chicago, presented by FMI, underscored the inevitability of the evolving consumer. Held in a funky, colorful meeting space inside a former meatpacking building, the room’s décor was designed to spark creativity with throwback pieces ranging from 1950s-era mismatched chairs to vintage games and toys like Etch A Sketch to a mix of classic and rare album covers.

The retro atmosphere was a reminder that people’s tastes change along with the times: today’s consumers are more likely to download music digitally, play games online or on devices and rarely dine at a kitchen table.

Keynote speaker Larry Keeley, president of Doblin, a Deloitte Company, compared and contrasted food cookery and retailing through modern history, noting that the ubiquitous Betty Crocker cookbook popular in the 1950s and early ‘60s was actually based on a fictional homemaker and produced by the Gold Medal Flour company. Keeley also highlighted the many ways that today’s digital platforms are rapidly – but in no less of a brand-driven way – transforming the way people shop and eat.

As the panelists noted, the consumer has always evolved, but the pace and scope of the evolution borders on revolution at this point.

For one thing, today’s younger consumers, including Millennials and behind them, iGen or Generation Z, are not only challenging and changing paradigms, but influencing buying and eating behaviors among other age groups. Dornblaser, who outlined and shared insight on all generations in today’s marketplace, pointed to opportunities within the Millennial and Gen Z age group. “Millennials want to know, ‘Is it fresh?’ ‘Where’s it from?’ They also want to go into a store and be entertained and shop the perimeter even more than they did a few years ago,” she said. “And the youngest ones are diverse, experimental, tolerant and more likely than Millennials to connect personally. They want signs and people to help them – ‘I’m looking for a jackfruit – where can I find it?’”

There are some notable common denominators across age groups, including interest in health and wellness and, thereby fresh foods. “What we see across all groups is that consumers are interested in health and transparency, and they want to know everything about where their food comes from,” Heinen observed.

Thanks to technology, the pace of evolution has picked up and spurred an “instant” mindset. “All groups expect anything, anywhere, anytime,” pointed out Heinen. Hamburger, noting that $20 billion is done in e-commerce every day, emphasizes the importance of having a user-friendly website, app and high-quality fresh foods that hold up differently in delivery than, say, a can of soup. “To really delve into fresh, it is a team effort with us and with the retailer to make sure the customer is satisfied at the end of the day,” he said.

“We’re not really winning, frankly,” declared Heinen of consumers’ demand for personalization that is only being fulfilled less than 50 percent of the time, according to industry research. To make it more personal, McHenry suggested a fusion between customization, health and technology: “Personalized wellness and mindful sourcing is what they want, and our digital experience allows us to do that.”

That said, personalization isn’t just digital: every panelist also advised retailers to encourage and train employees to converse with and guide their customers.

We opened the discussions at FreshForward with the consumer because we all know it starts with the consumer. Executives from retail and suppliers huddled together in breakout groups to further discuss the evolving consumer among themselves. One thing was clear, the consumer continues to evolve and change almost daily. Everyone agreed that once you get a step ahead of the consumer in fresh, things will change and we constantly need to re-evaluate and re-assess the consumers behavior. It’s a never-ending challenge.