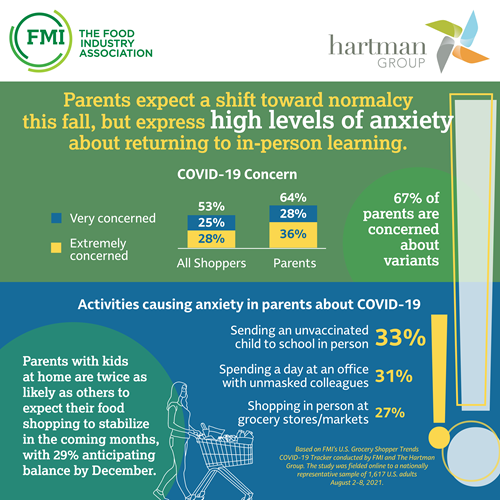 For almost 18 months, through the evolution of information about COVID-19 and the introduction of vaccines in the U.S., some Americans have been able to foresee a return to their definition of normalcy. The weeks leading up to Labor Day often mark a return to routine. This fall, offices where employees have been able to work from home have begun to schedule steps toward a return to office life. Many children will head back to in-person learning after making memories on summer vacations. Respecting Americans’ continued anxieties about staying safe and healthy, will these opportunities make it possible to imagine a light at the end of the tunnel and a return to a new – or next – normal? Grocery stores and other businesses could look forward to some degree of normalcy but also an imperative to plan for some rapid adjustments to align with this resumption of demand. FMI's latest U.S. Grocery Shopper Trends Tracker: Back to School/Back to Office reveals that as of early August 2021: