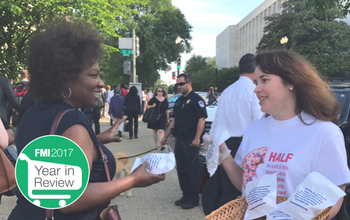 The end of the calendar year is a logical time for reflection. It allows the chance to analyze our successes, look at additional opportunities for the upcoming year and evaluate ways we can continue to build on our achievements. FMI and its members have a number of successes to be proud of this year – a testament to laying the groundwork and continuing faithfully down a path in spite of evidence of a successful outcome.

Many of the victories we celebrate today were made possible by your company’s participation in our coordinated efforts. These advocacy achievements took a lot of work and would not have been considered possible just a short year ago. While tax reform is probably the most significant legislative item for 2017, the broad range of legislative and regulatory items that FMI and the industry were able to influence – both offensively and defensively – demonstrates the diverse portfolio of issues FMI covers and bears all the unique characteristics of a heavily regulated industry. When folks on Capitol Hill ask about our broad interests, I tell them, “We chase pennies!”

Our 2017 wins (complete list included) were possible due to the hundreds of congressional office visits, store visits, emails and phone calls you made to educate lawmakers on the significance of their actions. Our efforts to explain the importance of protecting the 2010 debit card reforms resulted in House Financial Services Committee Chairman, Jeb Hensarling, removing repeal language in his financial reform legislation after more than 90 members of Congress weighed in, prompted by our advocacy.

Food retail’s efforts helped kill the onerous border adjustment tax (BAT) before serious debate about tax reform even got underway. Not only was it not included in any of the draft legislation considered in Congress, leadership and the Trump administration also explicitly excluded it from their September ‘Big Six’ framework. Many observers expected that LIFO would be on the chopping block during tax reform, but years of hard work by food retailers and wholesalers educating Members of Congress about the impact of repeal on the industry and consumers paid off – LIFO was untouched. And it was FMI Independent Operators who raised and championed the ability for companies operating in trusts for estate tax purposes to also be able to benefit from the pass-through rate reforms in the tax bill.  Again, showing the importance of well-timed and well-placed advocacy!

We initiated down-to-the-wire litigation to prevent the USDA from releasing sensitive SNAP store-level sales data and have prevented the sensitive data release for almost a year. While court action proceeds, we look for a legislative fix. We have advocated for and achieved more time and more clarity to implement FDA’s menu labeling rule (and developed an implementation guide for members), which led to the Administration’s providing a one-year compliance extension and re-opening the rule to receive input and make adjustments. While the overtime rule’s salary threshold ($47,476+) was struck down by the courts, the time FMI spent shadowing store managers and learning detailed examples from you to provide to the Department of Labor and the White House’s Office of Management and Budget kept a change to the duties test from even being considered.

As you will see from our list, the same kinds of examples are important for advancing or defeating state and local initiatives too – from tare weight changes to the imposition of or preemption from beverage taxes to varying SNAP restrictions.

These are just a handful of our 2017 achievements, but they tell a story of months (and even years) of investment in shoe leather, building relationships and a proactive membership of companies that understand the importance of participating in the policy process. We look forward to building on this list of achievements to help your companies do what you do best--sell safe, quality and affordable groceries in communities across the country.