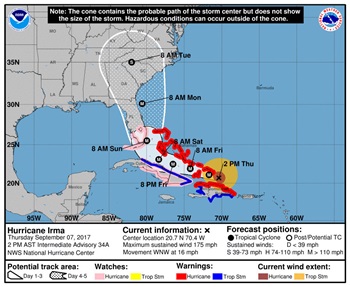 FMI wants to be a resource for our members that operate in Puerto Rico, Florida and other Southeastern states as they prepare for and later respond to Hurricane Irma. Below is a link to the FNS disaster page, this page includes an interactive map that will share state specific storm response information from the agency including SNAP waivers and other USDA nutrition program alerts. We will continue to update this page and provide additional links as we receive them from state and federal government agencies and others responding to the storm. Please do not hesitate to reach out directly to FMI if we can be of further assistance during this time.

While we all wait and see where Hurricane Irma decides to make her path, we wanted to go ahead and give you some vital information to prepare.

First of all the Governor signed a proclamation on September 6th declaring that all vehicles of legal size and weight transporting emergency related materials, supplies, goods and services in direct response to Hurricane Harvey or in preparation for, or response to, Hurricane Irma are hereby authorized to bypass all Alabama Department of Transportation weigh station facilities until 30 days from the date of this proclamation, unless the State of Emergency is sooner terminated.  To view the entire Proclamation, please click here.

Second, Byars | Wright has sent us a two page document on advance planning for Hurricanes. This document covers information on Disaster Recovery Plan as well as reviewing your insurance plan. To read this information, please download the Byars | Wright document.

Again, we do not anticipate Irma effecting Alabama directly, however we will continue to watch the storm track through the weekend. Please look for an update in your market minute on Tuesday.

Assisting With Relief for Children: