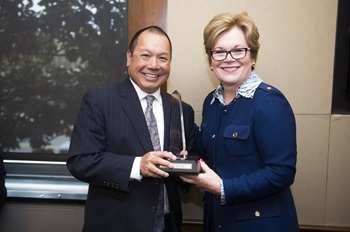 Model T creator and innovator Henry Ford once said, “Coming together is a beginning; keeping together is progress; working together is success.”  This quote comes to mind when I consider the two recipients of this year’s Donald H. MacManus Award. For only the second time since the award was created in 1990, FMI has selected two recipients - Ronald Fong, president and CEO, and Keri Askew Bailey, senior vice president of government relations and public policy - both from the California Grocers Association (CGA).

I am honored to be a part of a group that recognizes not only outstanding leadership in furthering the interests of the grocery industry, but the additional recognition that we do our best work together, for a common cause. The award, now in its 25th year, officially recognizes association executives for extraordinary leadership in public affairs, industry and community relations. 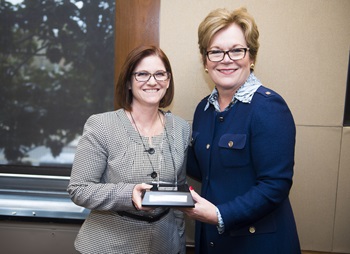 California is a megalith in terms of bill introduction; comprising some three percent of the 5,000 grocery-related state bills FMI generally tracks per year. The leadership and oversight provided by Ron and Keri has been instrumental in guiding the California legislative agenda and promoting issues of key importance to grocers. During their tenure, some of these issues have included the defeat of Proposition 37; fighting local proposals for warning labels and taxes on sugar-sweetened beverages.

Ron and Keri are advocates for the food retail industry, both within their state and on the national stage. They worked tirelessly with the state and federal governments to overturn California’s WIC moratorium on new SNAP vendor licenses. They met with government officials on all levels and offered testimony before the California Joint Legislative Audit Committee, demonstrating how the WIC moratorium was directly, negatively, impacting food retailers. The moratorium, issued in 2011, was finally rescinded in September, 2014, thanks in large part to the consistent, hard work of Ron and Keri and their persistence in telling the food retailer’s story.

Henry Ford also said, “Don’t find fault; find a remedy.” Ron and Keri together did just that this past session. They worked together with the legislature to pass the nation’s first-ever statewide bill to ban single use plastic carryout bags and to preempt any future local legislation. There are over 100 shopping bag restrictions in California alone, so the statewide preemption was a welcome response to a state filled with a patchwork quilt of many differing local laws.

Keri and Ron made a great team even before they worked together at CGA. While Keri was Chief of Staff to a State Assembly member, Ron was chief lobbyist for an association in the financial services sector. Over the course of several years, the two collaborated on issues relating to California banking laws as California worked through the first iterations of its financial privacy regulations. In 2005, Ron hired Keri to lobby on behalf of the credit union industry in California and Nevada, and their collaboration continues. In 2008, after an exhaustive national search, Ron joined CGA as president and CEO. In 2009, he hired Keri as CGA’s chief lobbyist.

Ron and Keri’s good work is not limited to the state legislature. Every other year, Keri and her husband go on mission trips to Cambodia to help provide services to rescue very young girls sold into the sex trade; a concept unimaginable to many in the Western world. Ron and his wife work throughout the year to support their teenage son’s private school and the many activities his busy young life includes. At CGA, Ron has worked to develop a culture of giving back, including a “staff day of service” each year for the entire team to get out into the community and make a difference.

One of the most insightful things Henry Ford ever said was, “There is no man living who isn’t capable of doing more than he thinks he can do.”  Ron and Keri exemplify this in their work in Sacramento, on the Hill and in the charity work they choose to do. Together, Ron and Keri are a formidable team demonstrating the skills necessary to successfully work a challenging and ever-changing political landscape. Ron and Keri are outstanding examples of leaders within the grocery industry, and I congratulate them on their achievements.