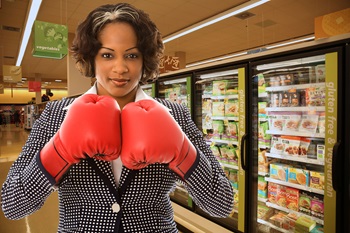 The food retailing industry often touts the strength of the perimeter, namely, produce, meat, bakery or deli/prepared foods. But there’s a contender in the ring; a heavyweight that boasts $57 billion in retail sales that’s conditioning for a strong comeback: Frozen food.

Sales numbers can tell part of the story. But understanding consumer behaviors and attitudes about frozen foods, as well as the usage of frozen foods in the home, tells a much more complete story about what will drive continued growth in this category.

FMI recently teamed up with the American Frozen Food Institute (AFFI) on The Power of Frozen to help manufacturers and retailers further align innovation, products, merchandising, marketing and branding with how consumers live, shop and cook.

To give some perspective on this inspiring comeback story in retail, I sat down with AFFI President and CEO Alison Bodor to discuss her top-three highlights of our analysis.

Since this is our inaugural edition, let’s start with an understanding of the size of the frozen food department for most retailers.

Bodor: “Frozen food is an enormous department for most retailers, ringing up nearly $57 billion annually. This is only a fraction smaller than fresh produce, bigger than all other fresh perimeter departments, bigger than candy and bigger than snacks.

“I’d also like to provide some figures on the frozen food comeback. In 2018, both dollar (+2.6 percent) and units (2.3 percent) grew, with nine out of 10 top-selling categories up in dollars and all 10 up in units. In addition to the sheer size, frozen covers every meal occasion, from breakfast to dinner and everything in between.”

It appears the frozen food growth was driven by more dollars and trips, but household engagement was largely unchanged. Seems like there’s a growth opportunity – what do you think?

Bodor: “Yes! While nearly all consumers buy frozen food throughout the course of the year (99.4 percent to be exact), there’s an opportunity for frozen food manufacturers and retailers to work together to increase consumption frequency. Thirty-five percent of consumers report that frozen is a well-integrated part of their eating routines, both as a backup and planned meal or ingredient solution. We’re calling these respondents our high-frequency or core frozen food consumer. They are frozen food evangelists!

“If we can connect all shoppers with in and out-of-store triggers, we can optimize the frozen food purchase – for example, through recipe ideation, coupons and shopper education. Shoppers in our research also asked for improved organization and signage, which will help with impulse and planned purchases.”

What’s the one key takeaway you think retailers should know about the core frozen food consumer?

Bodor: “I’m going to give you two key takeaways for the price of one! First, given their larger households, millennials are driving above-average spending and weekly store trips, and they are more likely to shop at supercenters, club stores and online so capturing their business is important, particularly as the Baby Boomer dollar is rapidly decreasing.

“Second, among shoppers who plan to purchase frozen foods, 73% of them sometimes or frequently add unplanned purchases to their carts. The more engaged shoppers are with the frozen food category, the more likely they are to buy unplanned items – that’s good for the manufacturer and the retailer too!”

The report is free to AFFI and FMI members and $500 for nonmembers.