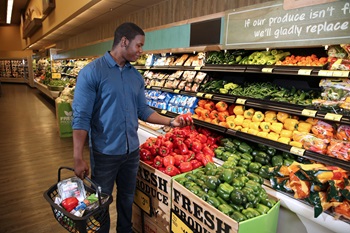 Yesterday, I stopped by my grocery store to pick up milk and trash bags — your typical fill in trip. As store layout goes, I was routed through produce to get to dairy. A gorgeous display of strawberries, blueberries, and other summer fruits drew my eye. Suddenly, my basket became heavier and my wallet felt lighter. My two-item basket grew to six items, and an impromptu fruit salad made its way onto my family’s dinner plate. And, that’s the Power of Produce.

Power of Produce 2017 finds three-quarter of shoppers plan their produce purchases pre-trip, and an even greater 86 percent of shoppers readily admit unplanned fruits and vegetables purchases frequently end up in their cart. That’s what makes produce a unique store item; it falls into both a planned and an impulse buy category. Fresh produce holds a strong household penetration at 99 percent, according to Power of Produce 2017. This gives food retailers a larger opportunity to leverage shoppers to buy more, rather than find more shoppers. Impromptu purchases are one opportunity that can help stores sell a greater volume of produce.

So what are the drivers behind impulse buys? FMI’s 2017 Power of Produce reports 58 percent of shoppers are enticed by eye-catching displays. Importantly, merchandising excellence has universal appeal across ages, incomes, channels and regions. Other important drivers of impulse purchases are hot promotions (particularly among Millennials and other non-planners), samplings, recipes/serving ideas and nutrition callouts.

But, are eye-catching displays and promotions enough to capture consumers’ impulse dollars? The study shows that while promotions are important in driving store trips, low prices may not be enough to seal the deal with consumers. When ranking a shopper’s purchasing decision, they easily rank appearance ahead of price. In other words, when it comes to produce, the eyes decide. For grocers to get the final sale, make sure your shoppers’ eyes are delighted when entering your produce department, whether it’s 10 a.m. or 7 p.m. A produce department that’s easy on the eyes goes a long way in enticing shoppers to open their wallets just a little wider.