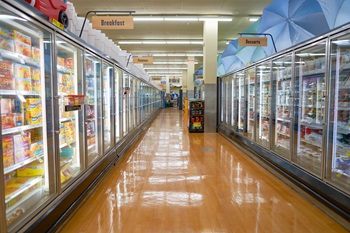 Refrigeration has been around almost as long as humans have been gracing the earth with our presence. From the ancient Greeks and Romans storing snow packed in underground pits to more recent practices of keeping large blocks of ice in an ice chest, for centuries we have been maintaining food and beverages at cooler temperatures to extend their “shelf life” and make them more enjoyable to consume.

Fortunately, we no longer have to resort to such rudimentary practices. Modern refrigerant systems play a vital role for food retailers to store, transport and display for sale countless products that Americans have come to enjoy. Yet, these systems have historically been some of the most energy intensive and costly outlays for the food industry. Given recent improvements in refrigeration technology and growing consumer preference for businesses that demonstrate their commitment to sustainability, more and more grocers are exploring how to make their refrigerant systems more cost-effective and environmentally friendly. One of the ways retailers can do that is through the U.S. Environmental Protection Agency’s (EPA) GreenChill Program.

The program now includes 33 food retail partners representing over 13,000 stores across the United States. On average, program participants have emissions rates that are roughly half the industry average and have prevented over 500 metric tons of ozone-depleting substances and roughly 100 million metric tons of carbon dioxide equivalent from entering the environment.

Each year, EPA highlights participating companies that have made outstanding achievements in refrigerant management through the EPA GreenChill Awards. The 2022 awards were announced last month at FMI’s Energy & Store Development Conference in Orlando, and I’m proud to say that 13 FMI member companies were honored for their efforts.

Target won the store leadership award for the company’s first net-zero energy store. Meanwhile, ALDI was recognized for certifying the highest number of Platinum level stores in one year by any company in GreenChill’s history. Hillphoenix installed the most systems in GreenChill Certified Stores for the tenth year in a row. Companies that received recognition for recertifying the most stores included Sprouts Farmers Market, ALDI, Weis Markets, Meijer, and Target.

We at FMI congratulate each and every one of these companies for the well-deserved honors they received from EPA, and I look forward to seeing the great strides our members will continue to make in further improving the environmental sustainability of their refrigeration systems.