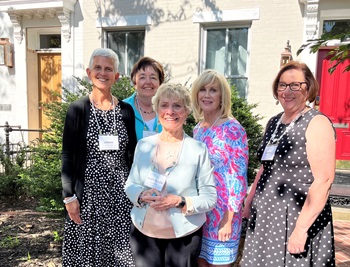 Here are some of the thoughts our colleagues shared:

What did you learn from Esther Peterson?

“As Vice President for Consumer Affairs at Giant Foods, Esther Peterson set the bar high for those of us who later followed. She fought tirelessly to make change happen, whether it was for the rights of workers, women, or consumers. In our industry, she believed in the need for product information transparency, long before transparency became a buzzword. She knew that it would help consumers choose products that were best for their families. This passion and drive resulted in the creation of nutrition labels and “sell before” dates. She challenged, fought, and made change happen. Change doesn’t come easily especially in an industry with such small profit margins. I learned from Esther, change is possible by challenging and proving that doing the right thing for the consumer ultimately is the right thing for the retailer.” --Maureen Murphy, retired, Price Chopper Supermarkets / Market 32, 2016 Esther Peterson Award Recipient

“Make a difference by the way you live your life," stated Esther Peterson. I would hope that I made a difference in my life from what I learned from Esther. Her leadership, vision, and relentless persistence in pursuit of what is right and just were a guiding force in my retail food industry career. I feel Esther had more impact on my career than any other person.”

“Esther was a pioneer, and she helped pave the way for supermarket companies to resolve consumer issues. Her work spurred the enactment of product expiration dates, unit pricing, nutritional labeling, and many other initiatives. Thank you, Esther, for your lifetime of vision, integrity, and caring sensitivity to the needs of retail food customers.” --Susan T. Mayo, retired, Farm Fresh, 2011 Esther Peterson Award Recipient

“Our history as Consumer Affairs Professionals has taught us how to properly serve and support our customers and respond to their needs. As customer communication technology evolves across all channels, companies should always have a strong and committed Customer Relations team to ensure that the voice of the customer is always represented and responded to.” --Susan T. Mayo, retired, Farm Fresh, 2011 Esther Peterson Award Recipient

“My advice to today’s consumer affairs/communications professional is to do what Esther Peterson did throughout her life - be a catalyst for change.  Also, take advantage of FMI if your company is a member, and if not, encourage them to become one. An invaluable resource, FMI is always there to provide assistance. Participate in the monthly calls whenever possible for to stay informed on issues, network with peers and more.” --Maureen Murphy, Retired, Price Chopper Supermarkets / Market 32, 2016 Esther Peterson Award Recipient

If your company is leading the way in consumer affairs and community uplift, we welcome you to submit your nomination for our 2022 Community Uplift Awards. Nominations are open June 13 - 24. Learn more at www.FMI.org/CommunityUplift.