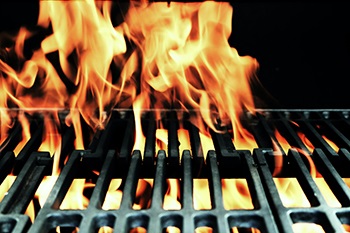 The Independence Day holiday conjures up all the senses associated with fire – the summer heat, the warmth of family and community gatherings, the smell of fireworks, and the permeating aroma of meat on the outdoor grill.

According to FMI’s Power of Meat 2021, 87% of Americans own a grill, and nearly half of them frequently use it to cook meat and poultry. Still, we recognize there’s some appliance competition, as younger generations are more likely to frequently use the newer cooking appliances or methods, such as air fryers, Instant Pots and sous vide, when preparing meat and poultry.

Personally, I remember pouring the charcoal into our open grate old style grill, dousing the coals with lighter fluid, setting the grate to a specific height – and watching my hamburgers flame until they were black on the outside and raw on the inside. Those days are gone, thank goodness, due to the modern advancement and conveniences of smokers, gas grills, outdoor kitchens. And as a nod to the recipes and YouTube programs that have expanded my repertoire, grilling has become an entirely new adventure at the Stein residence.

Grilling is a traditional July 4th activity that historians have charted back to the birth of our country, but over the years, the food items we choose to grill are everything but conventional. We’re witnessing these behaviors in our consumer research; Americans have learned new cooking skills as a result of the pandemic. Notably, nearly 30% of both produce and seafood shoppers tell us that they tried cooking these commodities using a different method, such as grilling (FMI, Power of Seafood, 2021 & FMI, Power of Produce, 2021).

Vegetables can be hearty; turnips and parsnips can even serve as an alternative to red meat, and they take on a smoking profile well. Asparagus that has been marinated in olive oil and fresh garlic can be set in a temperature-controlled gas grill until the tips are slightly charred, sealing in the zesty flavor profile. And, for Instagram, you can wow your followers with patriotic recipes: Red, white and blue could assume a color palette of grilled halibut, red peppers and purple potatoes.

We know shoppers are always looking for convenience and grilling often gives consumers the tools to create a crowd-pleasing meal in less than 30 minutes. Grocers are also sensitive to the economic situations of families in light of inflationary pressures, and the American Farm Bureau Federation’s new cookout survey notes that Americans will pay a few cents less this year for their July 4th staples. The analysis suggests, “The average cost of a summer cookout for 10 people remains affordable at $59.50, or less than $6 per person. The cost for the cookout is down just 16 cents (less than 1%) from last year, but 8% higher compared to 2019.”

I would be remiss if it didn’t offer a public service announcement: Remember to practice safe food handling and check those food thermometers. Both FoodSafety.gov and the Partnership for Food Safety Education have tips for consumers to stay well during their holiday celebrations.

I trust your senses have long been on fire thinking about your shoppers’ July 4 preparations this weekend. But remember, as James Beard said in his book “Beard on Food” (1974), “Grilling, broiling, barbecuing - whatever you want to call it - is an art, not just a matter of building a pyre and throwing on a piece of meat as a sacrifice to the gods of the stomach.”