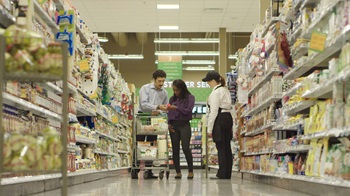 Collectively, these statistics tell a story about the food retail industry’s ability to succeed in any environment and the quest to stay agile to anticipate, accommodate, and embrace their shoppers’ shifting buying behaviors and requirements. The transactional data depicts broader marketplace realities.

In 2018, Speaksfinds the SKUs per store count to be 33,055, which is slightly higher than the previous year, however, lower than the 2016 figure of 38,900 SKUs per store. SKU counts have been on a general decline over the past decade. This is partly due to the popularity of smaller format stores and the growth of omnichannel strategies. And, retailers are laser focused on curating more selective assortments to meet their customers’ needs for personalization.

While stores have been experimenting with smaller footprints and department allocations, the average square footage per store has changed little over the past few years. What has changed, is the allocation between selling space and backend space.

What Does This All Mean?

Collaboration between suppliers and food retailers is reaching a critical phase. Better trading partner relationships means pairing the right mix of products and emerging brands with the right food retail environment all designed to meet customers’ interests. We see CPG companies expanding their product portfolios and more emerging brands finding their way to store shelves. At the same time, retailers are optimizing their product and merchandising mix and making decisions about how these new products should be displayed—in separate, designated areas or integrated into existing shelves and sets.

We’ve been tracking operational benchmarks for more than seven decades, but we’ve now witnessed significant shifts in business investments in the last several years. The number of SKUs might ebb and flow, but we find certainty in how retailers will continue to adapt, work along the supply chain and ultimately serve the customer.