Manage your subscriptions >
Home / Voice of The Food Industry Blog
The following article originally appeared in The Produce News. 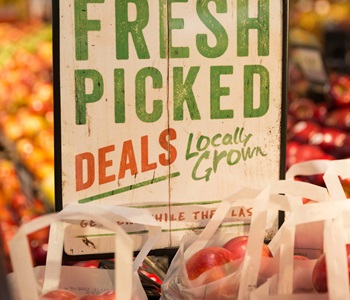 It’s summertime, and the living is easy – and so is the opportunity to merchandise locally-grown, in-season produce.

Now that growing and harvesting season is in full swing across most of the country, the time is ripe to leverage fruits and vegetables sourced from nearby farms and orchards outside of perennial growing areas like California, Arizona and Florida. Many of those products are a natural part of summer: Independence Day is just as synonymous with fruit salad as it is fireworks. For many Americans, June means asparagus, July means cherries and peaches and August means sweet corn, cantaloupe and tomatoes, to name a few examples.

The 2019 Power of Produce report confirms the importance of local, in-season produce to today’s shoppers. Nearly half (44%) of shoppers say they buy local whenever possible and more than half want a wider assortment of locally-grown produce. In fact, interest in expanded seasonal assortment jumped from 40 percent in 2017 to 53% in 2018. These items resonate with a cross-section of customers: seasonal positioning is attractive to Baby Boomers, while the term “locally grown” is especially important to younger shoppers, like Millennials and Gen Z.

As shoppers are naturally engaged with the produce department during the summer months, growers and grocers can work together to make the browsing and buying experience as satisfying and repeatable as possible. For example, using both the terms “locally-grown” and “in-season” broadens the appeal of fresh fruit and vegetable products and displays to shoppers of all ages.

These terms can also be cross-marketed to a foodservice area of a grocery store. Stores that make smoothies can promote the fact that the raspberries were just picked and bursting with flavor. An in-store café can let customers know that the vine-ripened tomatoes in the salads and sandwiches were sourced from a regional grower and are also available over in the produce department to buy and take home.

Another way to bolster produce sales at the store is to enhance the farmstand experience. As local farmer’s markets remain popular – the 2019 Power of Produce report shows that more than two thirds of shoppers periodically buy produce there – grocery stores can stay competitive by understanding what draws people to farmer’s markets and responding in their own way to those interests.

For instance, consumers cite freshness as the top reason to shop at farmer's markets, something that a grocer can also tout by calling out their speed-to-market, assortment of locally-sourced items and support of local farmers. Supermarkets can replicate the look of a farmer’s market by creating a pop-up farmer’s market event in the parking lot or store entrance or adding fun farmer’s market touches like chalkboards listing that day’s produce and where it was grown.

Meanwhile, as people want to know more about their food and where it comes from, telling the story of the produce, the farm and the farmers is an increasingly important element of merchandising. Shoppers like hearing background on what’s available, whether via point-of-sale signage or a conversation with a produce department employee, and they trust their supermarket to ensure that what they are buying is safe and of high quality.

On that note, communication, as always, elevates the produce-buying experience. Back in the day when I was working in a grocery produce department, a certain customer would regularly come in and pick up a huge watermelon and knock on it. I’d tell her, “If it knocks back, you need to let me know!” She loved that and always remembered me. If I was working in that same produce department today, I’d add that the watermelon came from a farm within a 50-mile radius of the store and would share some fun facts about watermelon planting and harvesting.

We know that the power of produce is strong, in that nearly 100 percent of shoppers purchase fresh produce. In peak season, that power is even stronger, so seize it and reap the fruits of stronger shopper connections and sales.