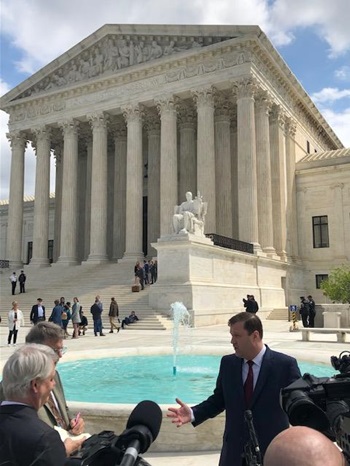 On April 22, the Food Marketing Institute presented oral arguments at the U.S. Supreme Court in a case with broad implications for large and small commercial enterprises. We have asked the U.S. Supreme Court to clarify the appropriate standard for exempting store-level Supplemental Nutrition Assistance Program (SNAP) data from public release — including whether the plain meaning of “confidential” should be applied or whether businesses must prove substantial competitive harm in every instance.

FMI’s counsel at Baker Botts, Evan Young, contended, “Our argument is not that simply marking something, or stamping it ‘confidential’ does the trick.” He maintained, “Do you bind it with nondisclosure agreements? Do you have security in place so that it limits the number of people even internally who have access to it? How do you make sure that it is not supplied accidentally in litigation, for example? How, in other words, do you make sure that it doesn’t become public?”

The nation’s grocery stores have long kept confidential the amount consumers spend at individual stores with cash, credit and SNAP. To business owners large and small, this store-level sales data is undoubtedly confidential because its release would provide an unfair advantage to competitors. 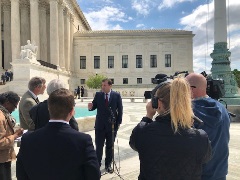 Young further argued to the justices, “I would say that even if the government gives us a promise of confidentiality, that fits within the definition of what confidential is, we now have given something to the government in confidence.  If we, nonetheless, publish it, if we’re sloppy with it, if we release it in some other way, then we have breached the confidentiality ourselves.”

What follows is a bit more background about the case, some analysis and a few takeaways from yesterday’s oral arguments. The full transcript can be accessed here.

Our argument is based on the Freedom of Information Act’s Exemption 4, which protects from mandatory disclosure all “confidential” private-sector “commercial or financial information” that comes into the government’s possession. Store-level Supplemental Nutrition Assistance Program (SNAP) sales data clearly fits within that category; no retailer makes public any information about each store’s market share in general, much less specifically for its customers who rely on SNAP.  And the ordinary meaning of “confidential,” which we have asked the Court to decide, requires only that a business demonstrate it keeps the information secret or protected from public disclosure. As an industry, it is unquestionably true that retailers keep their stores’ SNAP redemption data confidential.

What are we up against?

The most recent appellate decision against the FMI position used a very different definition of “confidential”— one that would require FMI members and all other impacted businesses to prove that releasing this specific store-level SNAP data, and potentially every other type of business data collected or held by the government, would result in a likelihood of “substantial competitive harm” if it were publicly released.  Before the nine justices, FMI's team of legal experts at Baker Botts presented our case to support the Supreme Court's retention of the ordinary definition of “confidential,” as Congress has outlined, rather than shifting to a much more difficult proof of “substantial competitive harm,” thereby re-defining the term.

This case goes well beyond the supermarket industry:


Notable Takeaways from the Supreme Court Line of Questioning 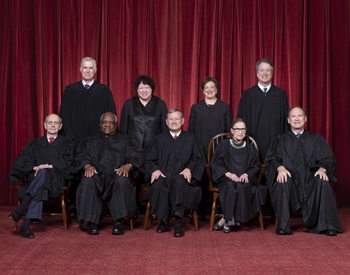 In response to a challenge regarding the motivation for FMI's intervention in this case after USDA had dropped it, FMI Attorney, Evan Young, Baker Botts responded:

“Instead of voluntarily disclosing it, which would be what they [USDA] would do if they decided to follow it, they facilitated our intervention by alerting us to the possibility of judicial intervention. They then, when we did intervene, told the district court, they told the federal court, as they've told this Court, we will not release that information unless a final judgment in the judicial system requires it.”

“But, when we're dealing with the word ‘confidential,’ Justice Kagan made the point that perhaps there's a gloss that's been placed on it that might be inconsistent with what might appear to be its ‘ordinary meaning.’ …And I'm just wondering how do you deal with that incongruity textually? So why should we give the same word two different meanings when they’re virtual neighbors?”

“We believe that the information here is -- the store-level redemption data is -- confidential because it's reasonably understood in context to have been communicated in confidence and held secret. Now the government has had 40 years of express assurances of confidentiality embodied in regulations and in an ongoing dialogue with Congress about these regulations, showing that the store redemption data was communicated in confidence because we would not disclose it.”

“I think there are a few outlier courts, but most courts have applied [the word “substantial”] as the Eighth Circuit here. It has to distinguish between substantial and insubstantial. And, here, the district court found that the evidence presented by the government and by FMI to show harm was speculative at best, and marginal at best. So they didn't meet whatever low standard […] you could articulate, but the requirement of some non-insubstantial likely harm I don't think is a too high a bar to put to the private party trying to bar disclosure of the information.”

The U.S. Supreme Court is expected to issue its decision in June.

For additional information about this Supreme Court case and the opportunity to explore public-facing materials, please visit www.FMI.org/SCOTUS