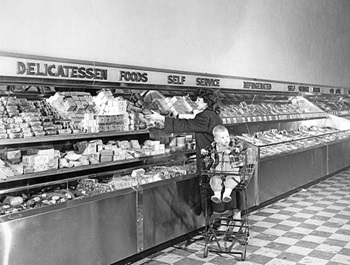 It has been a sixty-eight year tradition that every Spring FMI conducts the Food Retailing Industry Speaks survey. The report generated from this survey provides the industry with important benchmarks, facts and figures that are used in advocacy work on Capitol Hill, with the media and by members to make informed business decisions.

In addition, Speaks serves as a historical record of what is occurring in the food retail industry at any given time. As we complete data collection for the 2018 Speaks survey (responses due by May 31), I took a visit through the FMI archives to review the Speaks reports over the past almost seven decades. They tell an interesting story about what was happening in the industry and in America:

It was an exciting time in America as we began the post WWII boom. Unlike our current 24/7 world, three-fourths of stores were staying open one night a week and five percent were open on Sundays to serve their customers. One in four offered home delivery. Stay tuned to see how that compares to 2018.

Do you remember trading stamps? Almost three-fourths of stores offered them. Compared to just five years earlier, the average number of SKUs stores offered had doubled to 6,000. Two out of three stores were now staying open evenings either six or seven times a week. A whopping 97 percent of stores accepted cash only. In fact, 13 percent of stores would charge customers for check cashing. Can you imagine what would have been said about them on social media?

Coming out of the tumultuous 1960s, the world was changing. Trading stamps were on the decline, as only 37 percent of stores offered them. Carry-out hot food was a growing trend as 22 percent offered this to their customers. Again, stay tuned to see how that compares to 2018. The industry was exploring this new concept of automation from the supply chain to the customer experience.

The customer check-out experience was changing as scanners (used in 30 percent of stores), electronic scales (36 percent) and cash registers connected to computers (57 percent) were changing the experience. The movement from cash to credit was starting as 6 percent accepted credit cards as a form of payment. Trading stamps were reaching extinction as only 15 percent offered them.

Newspapers were a prominent advertising vehicle, but a new concept of targeted direct mail was gaining traction. Health care costs were skyrocketing (up 20 percent from the previous year) and impacting the bottom line. The average number of SKUs in a store doubled from 1980 to 26,000. And, stores were diversifying by offering banking services, photo labs (What are those?), pharmacies, flowers, dry cleaning and even stamps.

We survived the Y2K scare and the economy was booming. But maybe it was booming too much, as a tight labor market impacted the industry. Supercenters were seen as impacting the traditional store’s profits and mergers were prevalent in the industry. This new thing called the internet was something industry leaders were trying to understand and incorporate into their businesses.

Coming off a significant economic downturn, the economy was a top concern among food retailers. In an effort to compete for business, price competition was intense in the industry and the average store had expanded to offering 47,000 SKUs. Supercenters were seen as a competitive threat by traditional grocery stores and health care costs were also having an impact on the bottom line.

Help us make an historical record of 2018 by completing your Speaks survey by May 31st. We need your help in ensuring this data accurately reflects what is currently happening in the food retail industry. Large or small, conventional or niche — we need your company’s participation if our voice is to be genuine and carry the authority of the whole industry. Make sure future generations can look back into history to know what the industry was like in 2018.

Learn more and download the full 2017 (or previous year’s) Speaks report at FMI.org/GrocerySpeaks. If you did not receive an email from FMI about the Speaks survey or for questions, email research@fmi.org.