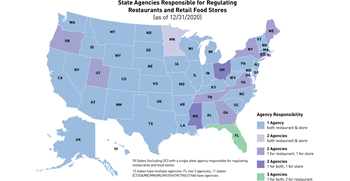 The FDA Food Code is one of those “go-to” resources for many retail food safety professionals.  The Food Code provides a foundation for many regulatory agencies across the U.S. and is a model that represents FDA’s best advice for a uniform system of regulation in order to protect public health and ensure the safety of food at retail and foodservice operations.  The first version of the Food Code was published in 1993.  The 2017 Food Code, the most recent version, was published last month and is available on the FDA Retail Food Protection webpage along with a Summary of Changes made to the 2017 Food Code.

According to a recent FDA report on the Adoption of the FDA Food Code by State and Territorial Agencies, “There are 66 state agencies responsible for providing regulatory oversight of either restaurants, or retail food stores, or both.”

While the Food Code is not a federally mandated regulation, each state has at least one agency who has adopted the Food Code.  However, the version that regulatory agencies have adopted widely varies – ranging from the 1995 version to the 2017 version of the Food Code.

So what does this mean for food retailers?

The variability and the patchwork of Food Code adoption across the U.S. creates a significant challenge for retailers to have to know and comply with the requirements of each jurisdiction in which they operate.

FMI supports uniform adoption of the FDA Food Code.  Successful federal, state, local and tribal partnerships for food safety allow strong scientific standards to be used in all regulatory jurisdictions.  The benefits of adopting and implementing uniform standards have long been recognized by both industry and regulatory agencies to protect public health.  Uniform adoption of the code leads to higher compliance, more consistent training, standardized inspections and increased sharing of information by all stakeholders.  When it comes to food safety, operators and regulators of retail food establishments share a common goal to produce safe, quality food for consumers.  Through the complete adoption and implementation of consistent standards, we strengthen our ability of achieving the shared goal of having a safer food supply.

The FDA Retail Food Protection Team hosted a webinar for FMI members to learn more about what changes and updates were made to the 2017 FDA Food Code.  A recording of this webinar is available here.

Image Source:  FDA’s Report on the “Adoption of the FDA Food Code by State and Territorial Agencies Responsible for the Oversight of Restaurants and Retail Food Stores”