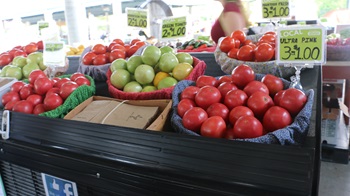 For Father’s Day, my daughter planned a father/daughter trip downtown to browse the big farmers’ market together. As a retail veteran, I must admit that I don't spend much time at farmers’ markets. But as it turns out, my daughter often goes with her friends to look for unique and local items in what she calls a fun treasure hunt. Once at the market, I was amazed at not only a number of produce items, but also the myriad of signs touting local, organic, seasonal, natural, sustainable and many other growing attributes. It occurred to me again, locally-grown items are a great way for traditional retailers to up their experience factor and capture some of the excitement around the expansion assortments in produce.

According to the Power of Produce 2017, 54 percent of shoppers would like their produce department to offer an expanded assortment of locally-grown produce. Shoppers’ are zeroing-in on a mile radius from where they shop and use state lines to define what they constitute as local produce. The study found 80 percent of consumers buy locally to help keep their dollars in their community. FMI’s U.S. Grocery Shopper Trends 2017 reports 72 percent of shoppers believe local is fresher, supports local economies and builds the vitality of communities.

Retailers have a real opportunity to leverage local as a way to drive trips and sales throughout the entire store, but especially in produce. For retailers to succeed, we must consider a succinct and consistent definition of local that can be portrayed through in-store co-marketing between retailers and growers, as well as, information on environmental programs. Throughout the year, grocers can offer an assortment of local items focused on freshness. This requires cultivating long-term relationships with farmers and suppliers to create the farmer-to-consumer experience, much like what I encounter at the farmer’s market.

Local is just one of the several growth drivers in produce, the study finds organic represents nearly 8 percent of all fresh produce dollars, and reflects 30 percent of all produce growth. For traditional retailers, produce brands are emerging as strong storytellers to consumers shopping the perimeter. Dollar sales for grower-branded produce items grew 12 percent over the past five years and private label increased eight percent, according to the report. With this research, you can build a produce destination that is every bit as fun to browse as the local farmers’ market!

Learn more about the Power of Produce 2017, visit FMI.org/FreshFoods.