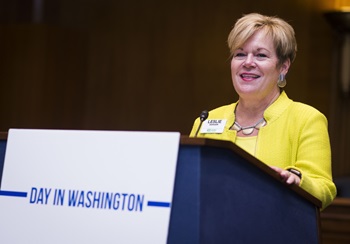 At the beginning of May, representatives from the grocery industry visited the nation’s capital for our annual supermarket Day in Washington fly-in, which is held in partnership with the National Grocers Association and Food Industry Association Executives. Grocers met with more than 230 congressional offices during an especially timely period in Washington. While a grocer’s day-to-day agenda is ever-changing, debit reform and tax reform were the top issues that members discussed with legislators. Meeting with lawmakers and participating in our fly-in events helps give congressional offices firsthand examples of how certain policy decisions can have an impact of your business operations. With the flurry of legislative activity that occurred in the halls of Congress last week, it was an especially critical time to be in Washington.Here's a quick recap of events and discussions at this year's Day in Washington:

During Day in Washington, FMI recognized Ellie Taylor, president of the Alabama Grocers Association, with FMI’s 2017 Donald H. MacManus Award for her many years of outstanding leadership and service.

FMI has closely followed the preservation of pro-competitive debit reforms since they were first introduced in 2010. The reforms have brought transparency and predictability into the debit routing market, keeping prices low for grocers and customers. However, mid-week, the House Financial Services Committee debated and approved legislation that contains language to repeal the 2010 debit reforms. As the bill makes its way to the House floor, FMI and our merchant coalition partners will use your meetings and messages to continue to emphasize the importance of the debit reforms and the need to strip the repeal provision out of the “Financial CHOICE Act”.

Meeting attendees heard from Carlos Diaz Rosillo, a policy director in the White House, as he addressed the need for alleviating some of the regulatory burdens the business industry faces. Attendees also heard remarks from Sen. Todd Young (R-IN), and Rep. Buddy Carter (R-GA) attended, as well.

Grocers’ ability to rise to meet challenges and face them head on, while remaining positive and optimistic, is one to be admired. FMI is grateful for the time that our members spent traveling to Washington to ensure that the industry’s voice continues to be heard in Washington. To stay in the loop with government relations happenings, sign up for the FMI Government Relations newsletter.