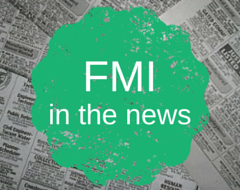 The local grocer often functions as the anchor to a community.  From providing quality, stable jobs to supporting causes like the local food bank and the youth softball league, grocers drive the local economy, all while providing safe, affordable, healthy foods to their customers. It is this tradition of community engagement and service to the customer that has kept third and fourth generation grocers thriving in an increasingly competitive industry that operates on a razor thin 1.9 percent profit margin annually. The food retail industry that the Food Marketing Institute and National Grocers Association proudly represent provides 4.8 million U.S. jobs and a large economic footprint.

As the U.S. shopper evolves, so must the grocery industry. Not only do we see growing competition in the traditional brick and mortar grocery store space, but its presence is also being felt in the online market as well. From the single store supermarket operator to the largest, nationwide chains, grocers must continue to innovate and find efficiencies to compete to earn customers’ return business.

Like others in the retail sector, grocers have seen their costs of doing business rise dramatically over the past several years. One area in which they have been able to recognize some relief and begin to contain costs is in the previously non-competitive debit market. The 2010 debit reforms modestly introduced competition, predictability, and transparency into a market where previously none existed.

VISIT THE HILL FOR THE FULL OPINION PIECE