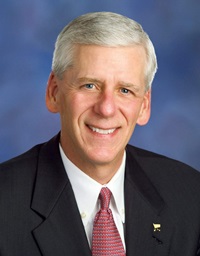 FMI acknowledged Crenshaw for excellence in serving the consumer, the community and the industry at a celebratory event at the Midwinter Executive Conference. The awards ceremony was further marked by a testimonial from Publix CEO Todd Jones, who recognized Crenshaw’s 42-year career saying, “It’s a reflection of our company culture and the legacy that you have built.  You’ve weathered recessions and fluctuating market trends; you’ve taught us how to be humble; you’ve been a mentor in our careers, a supporter of our communities, and built solid business relationships; and perhaps most importantly, you’ve given us your time and invaluable counsel.”

Crenshaw’s storied career began as a stock clerk for the company, and throughout his corporate journey, he held management, buying and store operations positions until he earned the titles of executive vice president of retail in 1994, president in 1996 and eventually took the helm as CEO in 2008. Crenshaw’s reputation for exceptional leadership is well regarded in the business and trade communities.

“Publix is consistently recognized as one of the top companies to work for 19 consecutive years, and it’s Ed’s remarkable leadership that has nurtured Publix’s reputation for two decades,” FMI President and CEO Leslie G. Sarasin remarked. “We honor Ed tonight because he has truly been integral to the strategic development of FMI policies and positions – from the development of industry resources, its health care agenda, labeling issues and its political action committee  –  all while keeping the needs of the consumer in a clear line of sight.”

Crenshaw has served with the Kidney Foundation of Central Florida, the Central Florida Speech and Hearing Center, the Polk Museum of Art, the Lakeland Chamber of Commerce, the Polk County School Board Business Commission, and Lakeland Regional Health Medical Center.  He is chair of the Board of Overseers for the Barney Barnett School of Business and Free Enterprise at Florida Southern College, and is a member of Florida’s Council of 100. He has served on the board of GS1-US and is a member of FMI’s board of directors.

A native Texan, Crenshaw graduated from Baylor University in Waco. He and his wife Denise have two children.