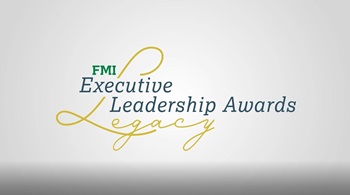 “The recipients of the 2023 Executive Leadership Awards constitute a masterclass in food industry leadership,” said FMI President and CEO Leslie G. Sarasin. “Their time-tested skills and cultivated expertise promoted food industry growth and gracefully elevated the industry’s profile, even when faced with the toughest economic environment in 40 years.”

The recipients of the 2023 Executive Leadership Awards are as follows:

After a lifetime of people-first progress and food retail success, the late Bob Obray raised the bar for humanitarian leadership and left an inspiring legacy of executive management best practices. In similar fashion to the “Great Humanitarian” Herbert Hoover, Obray led Associated Food Stores with the dual aim of maximizing consumer satisfaction and uplifting communities in need. During his 18-year tenure with the company, he consistently pushed for innovation and growth. As senior vice president and chief financial officer, he oversaw the development of the 2020 and Beyond Plan, which analyzed every facet of business at Associated Food Stores to identify opportunities for improvement. He also authorized generous donations to the Utah Food Bank, Primary Children’s Hospital, Muscular Dystrophy Association and Make-A-Wish Utah. Obray was fiercely committed to the strength of the independent grocer, customer care and collaboration among his industry peers. At the time of his passing, Obray was a vocal participant in FMI’s Wholesaler Share Group and an active member of FMI’s Board of Directors.

Esther Peterson’s historic legacy of consumer advocacy and future-focused progress perfectly captures the professional ethos of Liz Chace-Marino, Manager of Government Affairs at Ahold Delhaize USA, and Gordon Reid, President of Stop & Shop. Over the course of their illustrious careers, the two industry titans made a habit of taking decisive action to solve pressing community challenges – particularly in the area of hunger and nutrition. Notably, Chace-Marino and Reid work to help eliminate hunger and improve healthy equity in their communities.

Prior to joining Stop & Shop, Reid served as President of Giant Food, elevating the brand to the number-one market share position in each of its local markets. His leadership resulted in the company making healthy eating easier and more affordable for consumers, while also streamlining the traditional shopping experience through increased home delivery services. At Stop & Shop, Gordon has continued to be a champion in helping to limit barriers impacting a child’s ability to succeed in the classroom by making sure that they have consistent access to food. Through the Stop & Shop School Food Pantry Program, the company has established and supported in-school food pantries benefiting nearly 40,000 children and families at more than 165 schools across its five-state footprint.

Both honorees recently participated in FMI-hosted dialogs held at the Smithsonian’s American History Museum during Food History month to talk with industry and government leaders regarding industry commitments to ending hunger, improving nutrition, and reducing diet-related diseases following the White House Conference on Nutrition and Health.

William H. Albers, also known as “Mr. Supermarket,” was an avid industry collaborator. During his time as president of the Kroger Chain and Albers Super Markets, Inc., he leveraged the collective resources of the food industry value chain to expand company offerings and refine the customer experience. Rick Brindle’s vast portfolio of industry collaboration mirrors Albers’ approach to food retail leadership. A highly respected trade relations executive, Brindle began his career in 1977 as a food clerk at Safeway Stores, Inc. He then rose to leadership positions within Procter & Gamble, Nabisco, Kraft Foods and Mondelēz International. In 1997, he created Nabisco’s role of vice president of global e-sales, which carried over to Kraft Foods and Mondelēz International. In this role, Rick was recognized as one of the “CPG Industry 20 Top Visionaries” and has been credited with developing a “best in class” eBusiness strategic sales platform for grocers pursuing eCommerce strategies. In 2001, industry relations was added to Rick’s responsibilities. Brindle not only applied his many years of experience toward bolstering business success at Mondelēz, but as a founding member and long-time Chair of FMI’s Industry Collaboration Council, he has also invested his effort and industry expertise into FMI’s membership. As such, Rick championed Mondelēz International joining FMI as a charter member of the new product supplier membership category, as well as the creation of FMI’s two premier trading partner collaboration programs, the Strategic Executive Exchange program and the Annual Business Conference.

In order to maintain decades of consumer trust and top-tier customer service, a food retail executive must be highly transparent and proactive in prioritizing consumer demand, a healthy company culture and long-term relationships with vendor partners. Like food retail pioneer Robert B. Wegman, Art Potash fully understands that these traits are essential to the success of any grocery business. Art’s entrepreneurial leadership has been instrumental in overcoming extraordinary challenges in continuing Chicago-based Potash Markets as the beloved brand it is today. For example, Potash exemplifies the concept of the neighborhood grocery store, operating a Potash Markets store on the 44th floor of Chicago’s John Hancock building. He has also positioned his company to serve critical needs in the communities of downtown Chicago. During a period of civil unrest in the city, Potash Markets’ State St. location suffered damage twice, but each time reopened within days to serve community members. Beyond everyday customers, Potash welcomes legislators and journalists to his stores to advocate for the food industry in a host of areas, including swipe fees and tax and trade issues. Potash is a respected and engaged FMI Share Group participant, as well as an active member of FMI’s Board of Directors. Currently, he serves as Chairman of the Board for the Illinois Retail Merchants Association. For his impactful contributions to industry advocacy, Art Potash was selected as the recipient of FMI’s 2012 Glen P. Woodard Award, Jr., Public Affairs Award.

Following in the footsteps of famed food industry advocate, Glen P. Woodard, Jr., Ron Edenfield serves as an expert public affairs practitioner, championing the needs of food retailers in his home state of Georgia and across the country. In 1982, Edenfield co-founded Wayfield Foods, Inc. with a focus on becoming the best store in the community for top-quality products, superior service and competitive prices. As chairman of Wayfield Foods, Inc., Edenfield has been proactive in ensuring all members of the food industry have the opportunity to achieve those same objectives at their own companies through expert public affairs strategies. Together with his longtime government relations colleague, Moses White, and now Andre White, Edenfield has helped secure myriad legislative victories for the food industry. A constant fixture in Washington, D.C., Edenfield serves on both FMI’s Board of Directors and Public Affairs Committee. His expansive connections on Capitol Hill helped FMI form strong relationships with Georgia legislators, including House Agriculture Committee Chairman David Scott and House Agriculture Appropriations Subcommittee Chairman Sanford Bishop. At the local level, Edenfield invites legislators to ribbon cuttings and special events at his stores to give them a firsthand view of food retail’s challenges and community contributions. For example, when challenges existed in the Georgia WIC program, Edenfield invited the Georgia WIC Director to one of Wayfield’s stores to work the register on a Friday when WIC benefits were made available to customers. That bold strategy was the start of a dramatic overhaul to the Georgia WIC program that helped guarantee continued benefits for consumers. Ron and Andre have been known to bring fresh smoked BBQ to legislators which is now infamous all the way to Washington, D.C.

Few demonstrate a stronger love for company and career than Joe Sheridan, president of Wakefern Food Corp. Much like Sidney R. Rabb who served as chairman of his family’s grocery business for more than four decades, Sheridan has remained a proud and trailblazing employee of Wakefern for 47 years. His career at the company began in 1976, when he was hired as a selector in the company warehouse. He would go on to assume leadership roles in logistics, finance, procurement and management in the grocery, direct-store delivery, bakery, health and beauty care, non-foods and pharmacy divisions. Throughout the decades, Joe has been instrumental to Wakefern’s continued growth and success – and today, the cooperative has more than 365 stores under the ShopRite, Price Rite Marketplace, The Fresh Grocer, Dearborn Market, Gourmet Garage and Fairway Market banners. A staunch advocate of technology and innovation, in 2002 Joe helped Wakefern launch one of the grocery industry’s earliest online shopping platforms. He has also made significant investments in food retail AI to optimize product sourcing, inventory tracking and waste reduction. Additionally, under Joe’s leadership, the cooperative has expanded its banner brands portfolio, launched award-winning private label lines, and brought on new members. And perhaps closest to his heart, Joe has helped Wakefern expand its culture of giving, donating millions of dollars to soup kitchens, food pantries, homeless shelters and other charities fighting food insecurity, along with supporting diabetes research and veterans organizations. Sheridan serves on the FMI Board of Directors and is past Chairman. He also participates in multiple leadership roles on FMI board-level committees: Executive Committee, Industry Relations, Public Affairs, and Chairman of the Nominating Committee.  In 2020, he helped usher in a new era of governance at the association when FMI repositioned itself as the Food Industry Association.