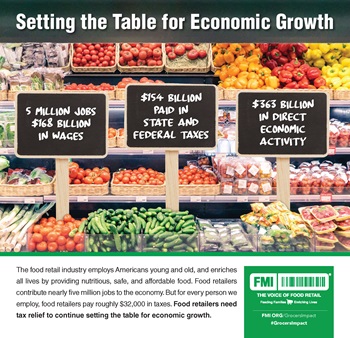 FMI’s analysis with John Dunham & Associates finds that food retailers have a significant economic impact on federal and state economies, employing roughly 4.8 million workers and producing more than $363 billion in economic activity in 2016. Food retailers also paid nearly $168 billion in wages to associates with diverse skill sets throughout the operations of a grocery store.

At the same time, the analysis demonstrates that the food retail industry faces a disproportionately heavy tax burden. The $153 billion the industry pays in taxes makes it exceedingly difficult for food retailers to hire new employees, raise wages for current workers, and meet the demands of the new consumer and marketplace. For each person food retailers employ, they pay nearly $32,000 in taxes.

Low profit margins compound the burden, as the average food retailer only nets one percent (1%) in profit after accounting for taxes, overhead and other costs, a consistent trend for the last three decades. Like all businesses, food retailers appreciate that they have a responsibility to supply government revenue and support public projects, from roads and bridges to law enforcement. But a tax system that picks winners and losers puts undue pressure on the nation’s grocery stores.

“Food retailers offer a rewarding career path and a steady source of income for job-hungry Americans. Simply put, all Americans — from employees and their families to customers — rely on the industry’s success,” says FMI President and CEO Leslie G. Sarasin. “Our industry needs tax relief to continue setting the table for economic growth.”

You can review the analysis at www.FMI.org/GrocersImpact.