Nanoscale materials may exhibit different physical and chemical properties compared with the same substances at normal scale. However, nano is not completely understood today; it involves a variety of fields such as physics, chemistry, biology, material science and engineering.

Nanoscale particles are not new in nature or science. Things such as hemoglobin, smoke from a fire, volcanic ash, and sea spray are all forms of naturally occurring nanoscale material.

Are there foods on the market containing nanotechnology?

Yes. Broadly speaking there are two categories of foods that contain nano-sized materials. One category is foods that have always contained ingredients that fit the size definition of nanoscale. An example is mayonnaise, an oil-in-water emulsion, where oil is dispersed in water so that the tiny particles don’t separate the way oil and water typically does. Another example is the network formed by gelatin at the nano-scale.

The second category of products are the ones that contain new types of ingredients that have been produced at the nanoscale. These are the ones that are getting more consumer attention. Applications include adding vitamins to products in a way that makes them easier for the body to use. In addition to improving nutrition, improving taste, flavor and texture are other ways in which nano-sized food ingredients can play a positive role.

Are foods that are produced using nanotechnology safe?

The considerations of and questions around nanotechnology and food safety are: What are the human and environmental impacts? Right now, there are many unanswered questions. It is the responsibility of food manufacturers utilizing nanotechnology to make sure that the products they produce are safe, and the science around the safety of ingesting new nanoparticles is still evolving.

As nanotechnology gains hold it is important to focus on how nanoscale materials are evaluated. Currently, we are in our infancy with respect to figuring out how to evaluate new nanomaterials for safety when they will be used in foods.

The World Health Organization (WHO) has issued a technical paper on nanotechnologies in which it states that the available information for this topic is limited. The WHO identifies that most research has June 2015 focused on occupational exposure to nanoscale materials, as opposed to the ingestion of foods containing nanoparticles. They identify the need for assessments in several areas in order to understand ‘nanotoxicology’:

This information will be critical in understanding whether and in what form the nanoscale material may be transported through the body (animal or human) and potentially enter into a cell and elicit a toxic response.

In 2013, the European Food Safety Authority (EFSA) reported their findings that, based on studies performed by Member States, updated protocol for in vitro and in vivo test methods to evaluate nanoscale material would be needed. Also, a 2011 review in the Journal of Food Science concluded that “there is a need for additional toxicology studies of sufficient quality and duration on different nanomaterials to further understand the characteristics of nanomaterials that affect the safety of oral exposure resulting from use in various food applications.”

How can I tell if foods are produced using nanotechnology?

As a result, it can be difficult for consumers to know if a food has been produced using nanotechnology. A consumer should contact the food manufacturer to get more information.

Specifically focusing on nanotechnology, FDA states that if the food substance were manufactured “for the purpose of creating very small particle sizes with new functional properties,” it would likely not be covered by an existing Generally Recognized As Safe (GRAS) determination because the determination requires both technical evidence of safety and a basis to conclude that this technical evidence of safety is generally known and accepted. Additionally, FDA states, “at present, for nanotechnology applications in food substances, there are questions related to the technical evidence of safety as well as the general recognition of that safety.” Thus, FDA’s basis for requiring a food additive petition be filed relates to whether or not the nanomaterials confer new functional properties, rather than just viewing the presence of such materials as grounds for requiring a petition.

There have been localized efforts aimed at addressing nano-technology. While not food-specific, in Berkeley, California, there has been a requirement since 2006 that laboratories working with any nanomaterials report the use to the city (http://step.berkeley.edu/White_Paper/Barandiaran.pdf; http://digitalcommons.pace.edu/cgi/viewcontent.cgi?article=1721&context=pelr).

An EU regulation around food additives states that if the particle size differs (such as by the use of nanotechnology, listed as an example), then it is considered a “different” additive and needs to be considered separately.

In Canada, the use of nanotechnology is not permitted for foods that are labeled “organic.”

Do consumers embrace or oppose nanotechnology?

At this time, relatively few consumers seem to be focused on nanotechnology. However, as the use of nanomaterials in foods grows, it can be expected that consumer awareness will grow, prompting questions around which foods contain nanoparticles and their safety.

A study of consumer attitudes found that about a quarter of consumers are motivated by price rather than the production techniques, a fraction will oppose any new technology, and the remainder are open to the technology if the benefits are clear—although some need more information to make those decisions than others (http://onlinelibrary.wiley.com/doi/10.1111/1477-9552.12090/abstract).The chart below highlights the different populations. 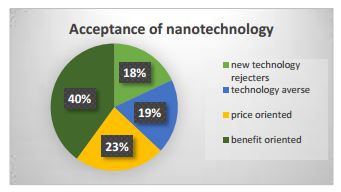 The science and politics of nanotechnology continues to evolve and consumers may begin asking questions around foods containing nanomaterials, similar to the types of questions and concerns expressed around Genetically Modified Organisms (GMOs).

Whether ingredients occur naturally or were engineered, it is difficult to identify which food products do and don’t contain ingredients in the nano-scale. Retailers should be aware of the Consumer Product Inventory database as a resource to their customers http://www.nanotechproject.org/cpi/

World Health Organization. ‘State of the art on the initiatives and activities relevant to risk assessment and risk management of nanotechnologies in the food and agriculture sectors.’ (Draft Public Review). Accessed Dec 5, 2014. http://www.fao.org/docrep/018/i3281e/i3281e.pdf