How Do You Get 300,000 Families to Send You Photos of Them Sharing a Meal Together? 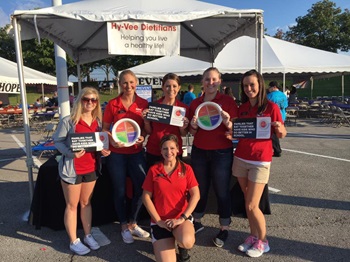 Hy-Vee had a simple goal last year as they celebrated National Family Meals Month™. They knew that, if families can simply share one more meal together each week, the health and societal benefits can be enormous.

This is how successful last year’s Hy-Vee National Family Meals Month™ campaign to encourage families to enjoy regular meals together was:

These examples and more can be found in FMI Foundation’s Best Practices for National Family Meals Month™ 2017.

Understanding how important the annual month-long event was, the company marshalled all 84,000 of its employees – including 228 dietitians in 242 stores – in the effort.

The first step Hy-Vee took was to carefully prepare the collateral materials it would need to make its case to the consumers throughout the region it serves. This content includes:

Even then, Hy-Vee wasn’t through laying the groundwork for what would eventually be a successful campaign.

Next it contacted more than 40 of its vendors and asked for their assistance in promoting its #HyVeeFamilyMeals social media campaign. It let congressional representatives and governors in the eight states it serves know about the campaign and asked for their participation.

There are more than 50 large school districts in the area Hy-Vee serves and each one of them got messaging about the campaign they could include in their school newsletters and communications with parents. The company followed that up with a news release that went to 2,600 media outlets and trade publications.

By the time September 30 rolled around, you would be hard-pressed to find anybody from Minnesota and Wisconsin down to Iowa and Illinois who hadn’t learned about Hy-Vee’s effort to encourage families to enjoy one more meal together each week.

What’s your plan for this year’s National Family Meals Month™? Go to www.FMIFamilyMeals.com to learn how you and your company can participate. 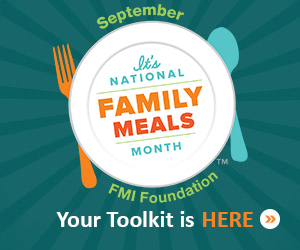 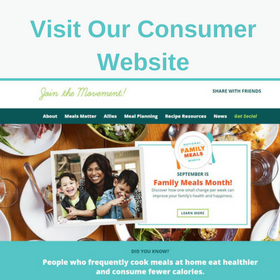