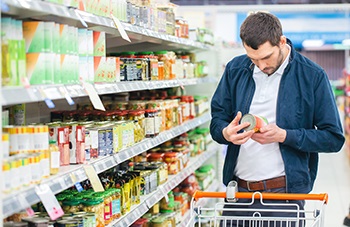 Ever wonder why there are so many brands and varieties of soup in the grocery store aisle? You probably don’t wonder, do you? Americans take for granted that if you’re in the mood for some comforting chicken noodle soup on a dreary fall day that you have the choice of cans that are loaded with veggies or that are creamy, or in my case, have extra noodles.

You have the choice of brands and varieties of soup, nuts, and every product in between at the store because grocers pride themselves on negotiating with suppliers for the products that you, their customer, want and need. Competition is the cornerstone of American commerce and that is very evident in the soup aisle.

It’s astonishing to think that the average supermarket carries about 50,000 different products and that every single one of these products – from the varieties of chicken noodle soup to the sizes of bags of pistachios – is negotiated with suppliers on quantity and price. And this is just one of many operational expenses that grocers negotiate on – everything from store shelving to grocery carts to mobile app designers to delivery service providers. The list of operational needs and negotiations is endless.

Accepting Visa and Mastercard credit cards is a take it or leave it scenario for grocers – either accept the terms, conditions, and fees or don’t let customers use a Visa or Mastercard credit card at checkout (a thought that is even nuttier than having only one choice of chicken noodle soup on the shelf). Retailers cannot negotiate with Visa and Mastercard and this lack of competition is hurting grocery stores and customers. Accepting these cards is a grocer’s second highest operating expense next to labor and rent.

Visa and Mastercard, and the largest banks that issue these branded cards, have blocked competition from other networks, leaving grocers with no choice and no ability to negotiate. The bipartisan Credit Card Competition Act, S. 4674, introduced by Senators Dick Durbin (D-IL) and Roger Marshall (R-KS), brings much needed competition to this space by requiring a credit card to have at least two unaffiliated networks on which to route financial data – Visa or Mastercard and a second competitive network. A simple concept to grasp – have at least two vendors compete for a grocery store’s business.

From soup to nuts: we know that good ole’ American competition brings about lower prices and more variety. Requiring credit cards to have at least two networks is a souper important reform for grocers and customers that Congress needs to pass now.