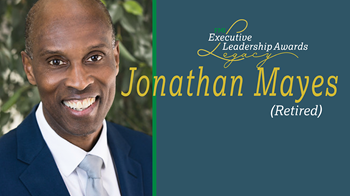 Going to the grocery store is an enriching experience, and it is so in multiple ways. Beyond the abundant variety of food items on every aisle, store associates are often members of the communities their supermarket serves. Representing their neighborhood’s diverse set of cultures, backgrounds and experiences, these frontline workers play a critical role in contributing to company culture by sharing their unique perspectives and skillsets. Whether in the produce department or in the corporate headquarters, the food industry depends on a dedicated and diverse workforce to grow and thrive.

Few comprehend this reality  more readily than the recipient of FMI’s 2022 Esther Peterson Award for Consumer Service, Jonathan Mayes. Mayes entered the food retail industry with the aim of giving a voice to underrepresented groups and advancing the interests of local communities. In 2015, he joined Albertsons Companies, Inc., as its senior vice president of public affairs, government relations, CSR, diversity & philanthropy. In 2017, Mayes was named chief diversity & inclusion officer at Albertsons Companies and led the company’s award-winning efforts to advance a culture of diversity, equity and inclusion among its nearly 300,000 associates. He has received numerous awards for his work, being twice named among the “Top 100 Chief Diversity Officers in the U.S.”

Mayes’ story reflects the food industry’s commitment to fostering greater inclusivity at all levels. His accomplishments echo the legacy of civil and workers’ rights advocates from decades past. In fact, Mayes credits Martin Luther King, Jr. for inspiring his iron-clad sense of service. In his Esther Peterson Award acceptance speech, he quoted King's observation, “Everybody can be great because anybody can serve. You don’t need a college degree to serve. Your subject and verb don’t have to agree to serve. All you need is a heart full of grace and a soul full of love.”

In that spirit, the food industry will continue to celebrate and inspire talent from all walks of life. FMI is proud to take a leading role in this pursuit by hosting a forum for critical conversations on racial justice, inclusion and diversity by way of our Digital Dialogues series, developed in collaboration with the Center for Food Integrity. You can revisit these dialogues on CFI’s YouTube channel and view the most recent, “Reimagining Agriculture: Initiatives to Advance DEI”. Also, visit FMI’s diversity, equity and inclusion (DEI) webpage for best practices, discussion and tools to enhance DEI at your company.

There are countless opportunities to make bold social change in the food industry and further the progress that has already been made. In the rousing words of Jonathan Mayes, “Let us continue to do great things. Let us continue to serve others.”