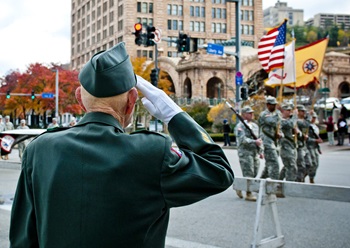 Holiday traditions have a way of growing and shifting over time as new layers of meaning and new customs are added to the ways we celebrate them. This is as true with Veterans Day as it is with other holidays. Its meaning has shifted and expanded over time. As the federal holiday honoring those who have served in the United States Armed Forces, Veterans Day was originally known as Armistice Day – commemorating the Allies’ signing the Armistice with Germany that ended World War I. In 1918, the terms of the Armistice went into effect and the hostilities ceased at the eleventh hour of the eleventh day of the eleventh month, giving rise to the traditional observance of the holiday on November 11 (11/11) and the customary observance of two minutes of silence at 11:11 (2:11 Eastern time).  In a national address calling for the observation of Armistice Day on November 11, 1918, President Woodrow Wilson said:

“To us in America the reflections of Armistice Day will be filled with solemn pride in the heroism of those who died in the country's service, and with gratitude for the victory, both because of the thing from which it has freed us and because of the opportunity it has given America to show her sympathy with peace and justice in the councils of nations.”

His remarks established this day’s dual purpose of honoring those who have given their lives in service of their country AND in celebration for the contributions of all in military service - living and dead - who served the higher cause of peace and justice.

In 1954, another layer of meaning to the holiday was added.  Post-World War II, a movement to have Armistice Day commemorate the service of all veterans, not just those who served in World War I, eventually resulted in Congressional action to expand the intent of the observance and resulted in a name change. Armistice Day was amended to the more inclusive Veterans Day.

FMI joins a grateful nation in giving thanks this Veterans Day to those who made the ultimate sacrifice for the freedoms we cherish, and we offer our appreciation for the many contributions all veterans have made to improve the quality of our lives.

But there is another value – extending even beyond the service they have already rendered to our country – that I wish to highlight this Veterans Day. I suggest another layer of meaning and means of celebrating Veterans Day this year. As the website, VeteransEmployment.net, points out, veterans become great employees. With many years of leadership, management and technical work experience, veterans have many of the labor skills the food industry needs.  As the food industry seeks to address the labor shortages that are challenging us, many companies are finding viable solutions in the skill set veterans bring to our needs in technology, supply chain and management. Perhaps the greatest way we could celebrate this Veterans Day is by helping some of America’s veterans in their transition from the military to a promising food industry career in the civilian sector. That sounds like a win-win situation to me.