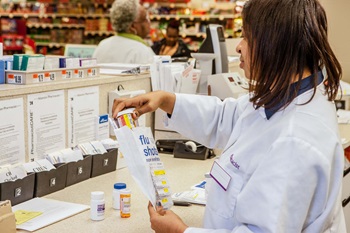 At a time when pharmacies are more important than ever to supermarkets and our customers because of their link to wellness, they are also increasingly important to federal policy efforts – from combating the ongoing, nationwide opioid epidemic, to lowering the cost of prescription drugs.

Last Wednesday, in the midst of National Pharmacy Week, President Trump signed into law the SUPPORT for Patients and Communities Act to help the nation combat the ongoing opioid crisis. During a time of extreme partisan gridlock, it was very encouraging to see the bipartisan effort that led to this significant, wide-ranging legislative package. While the new law includes myriad measures to reduce opioid abuse and misuse (click here for a section-by-section summary), perhaps the most noteworthy takeaway for our industry is the way it recognizes the crucial role pharmacists can play.

The chapter of the law entitled “Empowering Pharmacists in the Fight Against Opioid Abuse” allows pharmacists to decline filling prescriptions under certain circumstances, such as when a pharmacist suspects the prescription is fraudulent, forged or of suspicious origin. It also requires the Department of Health and Human Services (HHS) to develop and disseminate training programs and materials on both the circumstances under which a pharmacist may refuse to fill a prescription, and the federal requirements related to such refusal. We will continue to work with HHS on this key effort.

Pharmacies have also become front and center in the push by policymakers to lower the cost of prescription drugs, while also increasing transparency throughout the supply chain. On October 10, the President signed two bills into law that allow pharmacists to tell patients when their drugs would be cheaper paying cash out-of-pocket instead of using their insurance benefit. Before the bills became law, most pharmacists were prohibited by so-called “gag clauses” from proactively sharing with customers whether their prescription would cost less if they paid out-of-pocket, rather than utilizing an insurance plan.

HHS produced two videos highlighting the role pharmacists can play in lowering costs following the passage of this legislation. The first advises patients about the kinds of questions they should ask their pharmacist, while the second demonstrates pharmacists’ newfound ability to have more proactive, open communication with their patients.

The Administration’s continued emphasis on increasing transparency and reducing consumer costs at the pharmacy counter provides a potential opening for the reform of direct and indirect remuneration (DIR) fees – the ultimate source of frustration for FMI member pharmacies. Hard to explain and impossible to predict, DIR fees refer to price concessions that are assessed weeks or months after prescriptions are filled, rather than at the point of sale. These retroactive rebates and price concessions are bad for consumer wallets and pharmacies alike. Given pharmacies can realize long after a prescription is filled that they didn’t even recoup their costs, these retroactive fees sure make running a pharmacy business challenging! FMI will continue to work with our allies on this advocacy effort.

Let us add you to our pharmacy newsletter. Email Peter Matz.