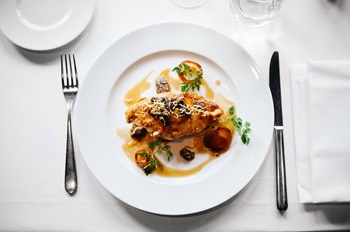 Food retail’s proud heritage of community involvement is demonstrated on multiple levels. Grocery stores are often the first to volunteer their resources when local events and sports teams seek support. When a natural disaster strikes a neighborhood, supermarkets usually get high marks for quietly sustaining a stand-up presence in the midst of the chaos and helping bring a degree of normalcy in the aftermath of disarray. And because they provide the makings for every family feast, local food retailers occupy something of a silent seat at every family dinner table.

Because they play such a vital and visible role in our communities, real estate agents have been known to point to the local supermarket as a neighborhood’s selling point when trying to close a deal. But there is one way food retailers support their communities that seldom is noted or fully appreciated, and that is the extraordinary contribution the food retail industry makes to America’s economic picture. Thanks to recent research that FMI commissioned, there is data that paint an impressive picture of just how deep that economic support runs.

The U.S. food retail industry employs 4.8 million workers, representing the equivalent of the entire populations of Idaho, Maine, Delaware and Montana. And those workers are drawn from every age bracket, ethnic background and educational level present in our nation. To see the face of America, we need only look at those serving customers in the produce section, at the countenances greeting folks at checkout and the people corralling the grocery carts in the parking lot.  In so many ways each supermarket team is a microcosm of all that America is and could be.

Where there are workers, there are wages. The food retail industry pays more in wages ($168 billion) than the combined Gross National Products of Ecuador, Uruguay and Madagascar. Perhaps even more impressive is the fact that food retailers help keep our economy stimulated by providing some $363.2 billion in direct economic activity. That’s quite an ongoing stimulus package.

Where there are workers and wages, there are taxes. For those 4.8 million workers employed in the food industry, it pays $154 billion in state and federal taxes. According to an analysis by NYU’s Stern School of Business, food retail companies – on average – paid 34.01 percent in taxes. To help put this data point in perspective, consider that of the 94 industries the Stern report evaluated, only 15 industries paid a higher average tax percentage. I think I can safely say that this is not an area where food retail wants to be a leading industry.

Our industry is in a time of great transition and change. The landscape is evolving in ways that necessitate significant capital expenditures and investments in order for traditional grocery stores and supermarkets to remain competitive. On average, food retailers operate on a one to two percent profit margin and that number has not changed much for decades – remaining constant through good economies and bad. A one to two percent profit margin does not allow much wiggle room for experimenting in new directions. But for good or ill, innovation and experimentation is exactly what today’s competitive landscape demands.

For the food retail industry to continue to support American lives and communities as it historically has and wants to continue to do, the industry must innovate, experiment and transition. The capitol necessary for underwriting these changes will not come from consumers who continue to feel the pressure placed on their own paychecks. Among the best ways to fund the industry’s investments in the future is through permanent tax reform that allows the creation of jobs and enables economic growth. Simply cutting the effective rate paid by the food retail industry from its current high of 34 percent to 20 percent would free up billions of dollars for new technologies, new jobs and new directions.

For the food retail industry, tax reform is not about profits. It is a once in a generation opportunity to provide the new marketplace its shoppers are demanding.