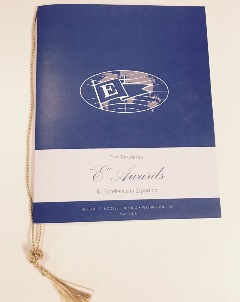 The President’s “E” Award recognizes companies for “Excellence in Exporting.” During World War II 4,000 “E” Awards were awarded to war plants in recognition of production excellence. As a winner of the “E” award companies receive and were authorized to fly the white and blue “E” pennant which quickly became a badge of patriotism in action.

December 5, 1961 President Kennedy by Executive Order revived the World War II “E” symbol of excellence to honor and recognize American companies exporting efforts. The Fremont Company, a 2016 honoree of the President’s “E” award was one of only fifty companies, and the only food manufacturing company to receive this award this year.

It was my pleasure to join FMI Private Brand Council members Chris Smith, president and CEO and Mike Hackbarth, vice president of sales and marketing with Fremont to celebrate this honor at a ceremony and luncheon at the United States Commerce Department.

It is a true honor for a private label food manufacturing company to collect this recognition and a true testimony to the growing sophistication of private label brands for food retail. You can view Fremont’s “Excellence in Exporting” award winning ketchup at FMI Connect in the Private Brands and Fresh Zone as part of the new product showcase.