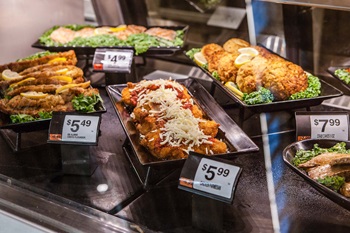 You’re on your way home from work and realize you didn’t plan anything for dinner. As panic starts to set in you realize you have to make a choice—do you stop off at the grocery store to pick up some quick meal solutions or do you go out to eat?

Here are the top 10 in-depth findings from the report. 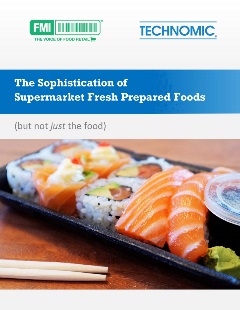 1. Supermarket fresh prepared foods grew by an annual rate of 10.4 percent between 2006 and 2014 making it one of the highest performing segments in the entire food industry.

2. While only 8 percent of responding supermarkets reported total store sales growth of more than 5 percent in 2014, 69 percent reported that same level of growth (or much higher) in their prepared foods department.

3. Clear lines of delineation can be observed between supermarket chains based on their prepared foods strategies and execution.

4. Professionally-trained chefs are being tasked with contemporizing the prepared foods menus of leading supermarket chains and 88 percent of banners now employ a corporate executive chef.

6. In an attempt to replicate a restaurant-style experience, 23 percent of responding supermarkets report having re-modeled deli departments in the past three years.

7. Managing a deli profit and loss is commonplace, but 43 percent of responding supermarkets indicate that they also manage a separate prepared foods profit and loss.

8. Another sign of increasing sophistication is supermarkets’ reduction in prepared foods SKUs (over half offer fewer than 50 items) while still accommodating the shopper desire for variety.

9. While prepared foods growth rates can be expected to stabilize, the segment will continue to be considered high-growth in comparison to virtually all other retail food and traditional foodservice segments.

For the full study and more research on fresh foods in food retail, visit www.fmi.org/FreshFoods.